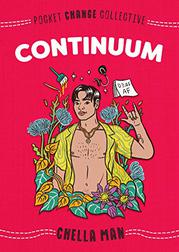 From the Pocket Change Collective series

Deaf, trans artist Man meditates on his journey and identity in this brief memoir.

Growing up in conservative central Pennsylvania was tough for the 21-year-old Deaf, genderqueer, pansexual, and biracial (Chinese/White Jewish) author. He describes his gender and sexual identity, his experiences of racism and ableism, and his desire to use his visibility as a YouTube personality, model, and actor to help other young people like him. He is open and vulnerable throughout, even choosing to reveal his birth name. Man shares his experiences of becoming deaf as a small child and at times feeling ostracized from the Deaf community but not how he arrived at his current Deaf identity. His description of his gender-identity development occasionally slips into a well-worn pink-and-blue binary. The text is accompanied and transcended by the author’s own intriguing, expressionistic line drawings. However, Man ultimately falls short of truly insightful reflection or analysis, offering a mostly surface-level account of his life that will likely not be compelling to readers who are not already fans. While his visibility and success as someone whose life represents multiple marginalized identities are valuable in themselves, this heartfelt personal chronicle would have benefited from deeper introspection.

Best enjoyed by preexisting fans of the author.