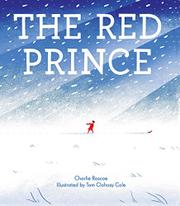 When a young prince is captured, the townspeople come to his aid in a surprising way.

In the dark of night, strangers armed with guns sail to the land of Avala and seize the city. They grab the boy prince, still in his red pajamas, and imprison him in a tall tower. With the help of a sneaky canine, the prince escapes but must travel far to get back to his city. Like a cardinal in a stark winter scene, his red pajamas stand out against the snow, making him easy to track. When he finally gets home, the strangers are closing in. However, he flings open the city gates, and all his people are dressed head to toe in red. “The prince was invisible in a sea of brilliant color.” The crimson crowd spills over an immense, wordless double-page spread, hiding the prince and bringing him to safety. However, in a strange, final reach for tension that feels as though it were added to meet page count, the prince separates himself from the crowd to chase his dog and is cornered by the strangers once again, necessitating that the townspeople save him a second time. The prince and his royal parents are white, as are most, though not all, of the citizens of Avala.

A fable that attempts a spirit of community and loyalty but falls a bit flat in storytelling.