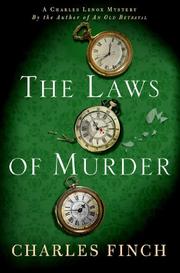 THE LAWS OF MURDER

A Victorian private investigator teams up with Scotland Yard to solve a case that involves one of their own.

Charles Lenox has given up his seat in Parliament to return to his first love: solving crimes. He’s entered into an agreement to run a new detective agency with his protégé, Lord John Dallington; well-born widow Polly Buchanan, who’s already been associated with a successful agency; and the Frenchman LeMaire. Their new enterprise has been greeted by some surprising newspaper criticism they attribute to Lenox’s friend Inspector Jenkins. Lenox in particular is getting no clients. Despite the cold shoulder from Scotland Yard, Lenox immediately agrees to help when Inspector Nicholson calls to tell him that Jenkins has been murdered. The inspector was found shot in front of a house just a few doors from the home of the Marquess of Wakefield, a man Lenox is sure is guilty of a number of crimes. Now Wakefield has vanished. The detectives think he’s on the run until they find his body, poisoned with lead added to some expensive port and hidden in a salt-filled trunk in the hold of a ship about to sail for India. The label on the shipping crate carries the name of a man they cannot find despite every effort. Unhappy with the partnership, LeMaire leaves, and Polly’s tempted by a lucrative offer to run her own agency. With the loyal Dallington at his side, Lenox continues to explore every avenue. And, once Wakefield is taken out of the running as the criminal mastermind, Lenox must discover who is running the show while trying to save his failing agency.

Finch’s clever hero (An Old Betrayal, 2013, etc.) overcomes despair and calumny to solve one of his author’s thorniest puzzles.