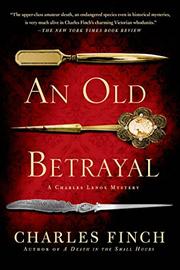 Charles Lenox, Member of Parliament, returns to solve one crime and prevent an even more significant one in Victorian England.

A demanding career in the House of Commons has inspired Charles to retire from the detective business. But a request for help from his protégé, Lord John Dallington, brings Lenox to Charing Cross Station for a meeting with an anonymous client. A third party calling himself Archie Godwin interferes, however, and only Lenox and Dallington’s dogged legwork reveals that the elusive client is Grace Ammons, one of Queen Victoria’s social secretaries. Grace is privy to a conspiracy that leads to a murder of the real Archie Godwin, whose identity is confirmed by his sister Henrietta. While Lenox tries to sort out blackmail, burglary, stolen identity, an even more surprising murder and an ancient grudge, he must also deal with the faltering marriage of his closest friend, allegations about his secretary, the identity of a rival detective known only as Miss Strickland, and, when he can find the time, his political career. Although Lenox prevails with humor and dignity, most of the supporting characters riding his well-tailored coattails are sketchy at best in an otherwise enjoyable yarn.

Although Finch (A Death in the Small Hours, 2012, etc.) has created an intelligent and amiable protagonist, too many supernumeraries, subplots and teacups dilute the impact of the central puzzle.