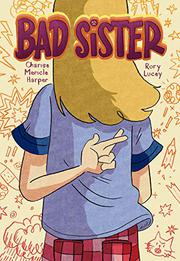 From the day baby Daniel arrives, crying so loudly that it hurts Charise’s ears and absorbing her mother’s attention, Charise starts growing into her role of bad sister.

The popular children’s author highlights rough-and-tumble episodes from their childhoods that scar her and her brother, literally and figuratively. Charise plays wildly, tricks her little brother, and enjoys her power. Often Daniel gets hurt, and her parents insist she should know better. The selected stories and details shared here reveal volumes about the family’s dynamics. The siblings’ escalating antics are captured in clean, colorful panels that often end with moving illustrations in moody blues conveying Charise’s isolation, frustration, and guilt. Readers will relate to the rivalry, ambivalent feelings, and raw honesty—and they, unlike Charise’s parents, will see the full picture: It takes two to tango; sometimes four, counting their parents’ roles in exacerbating everything. As Daniel grows and Charise matures, the dynamic changes as well. Charise admires Daniel’s social skills which she feels she cannot match, partly due to her undiagnosed prosopagnosia, or face blindness. Over time she begins to treat Daniel better, especially after reaching a turning point when she clearly sees the lasting consequences of her behavior. By the end, they become partners, with the power to forgive. This is a powerful story of growth, self-awareness, and genuine insight into family relationships. Most characters read as White.

Cathartic proof that childhood provides lessons for a lifetime and that change is possible.