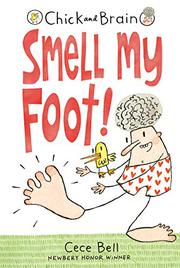 A comedic duo stars in their first comic—a playful homage to the Dick and Jane books.

Brain certainly looks smart. But, by Chick’s assessment, Brain’s social ineptitude says otherwise. Chick minds their p’s and q’s, modeling proper behavior for Brain to emulate. Brain takes Chick’s repeat-after-me lessons a bit too literally, however. Instead of copying, Brain responds directly—often hilariously off-script. In exchange after exchange, the pair’s silly chemistry peaks with the human and the bird smelling each other’s feet. Soon, a dog named Spot arrives on the scene, adding their nose to the mix. All that foot sniffing—specifically, yummy chicken foot sniffing—prompts Spot to invite Chick over for an exclusive lunch. Will Chick see through Spot’s politeness before winding up on the menu? In this first series entry, Bell flips the repetitive primer structure on its head and transforms it into a winning oddball comedy. With a limited vocabulary of around 120 words—exclusively presented through dialogue—the four-chapter story is a careful blend of verbal and visual humor. The comic-book format, with usually one to four panels per page, heightens the silly factor with well-placed punchlines. Bell’s highly expressive watercolor and ink cartoon illustrations set characters against sparse backgrounds. It’s up to readers to decide whether the wrinkly gray mass atop white-presenting Brain’s head is tightly curled gray hair or an exposed brain.