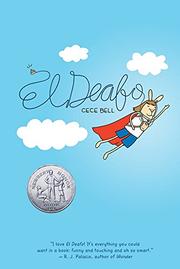 A humorous and touching graphic memoir about finding friendship and growing up deaf.

When Cece is 4 years old, she becomes “severely to profoundly” deaf after contracting meningitis. Though she is fitted with a hearing aid and learns to read lips, it’s a challenging adjustment for her. After her family moves to a new town, Cece begins first grade at a school that doesn’t have separate classes for the deaf. Her nifty new hearing aid, the Phonic Ear, allows her to hear her teacher clearly, even when her teacher is in another part of the school. Cece’s new ability makes her feel like a superhero—just call her “El Deafo”—but the Phonic Ear is still hard to hide and uncomfortable to wear. Cece thinks, “Superheroes might be awesome, but they are also different. And being different feels a lot like being alone.” Bell (Rabbit & Robot: The Sleepover, 2012) shares her childhood experiences of being hearing impaired with warmth and sensitivity, exploiting the graphic format to amplify such details as misheard speech. Her whimsical color illustrations (all the human characters have rabbit ears and faces), clear explanations and Cece’s often funny adventures help make the memoir accessible and entertaining. Readers will empathize with Cece as she tries to find friends who aren’t bossy or inconsiderate, and they’ll rejoice with her when she finally does. An author's note fleshes out Bell's story, including a discussion of the many facets of deafness and Deaf culture.

Worthy of a superhero.