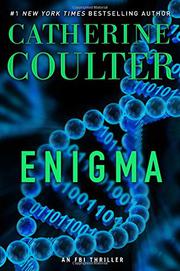 Not one but two exciting new cases for Coulter’s FBI (Insidious, 2016, etc.).

Much to the displeasure of Detective Aldo Mayer of the D.C. Metro Police, Special Agent Dillon Savitch sneaks into the home of Kara Moody, a pregnant woman who's being held hostage by a seemingly crazy young man who's raving about unspecified dangers to both of them. After Savitch is forced to shoot the unidentified man, both he and Kara end up in the hospital—Kara in labor. Savitch is worried about the John Doe, who's still unconscious, and asks the police to provide protection, which Mayer pulls without timely notification. Only the presence of Kara, who's visiting his hospital room, saves the man from an assassin. When Kara’s newborn son, Alex, is kidnapped from the hospital, Savitch thinks finding his father may provide answers. Unfortunately, Kara remembers nothing of the party she attended at a friend’s house where she suspects she was roofied, raped, and impregnated. Savitch’s wife, Sherlock, works with the team that’s been set up to find missing babies while Savitch hunts for answers to the unidentified man’s background and an unusual drug found in his system. Meanwhile, Irish charmer Liam Hennessey , who prefers the moniker Manta Ray, is daringly broken loose while he’s on his way to prison for robbery and murder. Savitch asks ex–Army Ranger Special Agent Jack Cabot to join one of his new agents, Cam Wittier, in leading the manhunt because he knows that the escapee and his rescuers are headed into the Daniel Boone National Forest. The pair join a forest ranger and Police Chief Harbinger in a dangerous hunt. Hennessey, who had hidden the proceeds from his robbery of a bank's safe-deposit vaults, has apparently been freed by someone desperate to get back one of the missing items. In order to solve both cases, Savitch and his teams must go way beyond ordinary police work to come up with some surprising and horrifying motives.

A formulaic twofer combines some interesting philosophical questions with more familiar charges of Beltway corruption that could be ripped from the latest headlines.