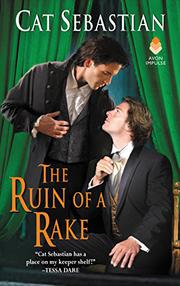 THE RUIN OF A RAKE

Two very different men, haunted by their pasts but drawn to each other, forge a future together.

The third in Sebastian’s Regency romance series (The Lawrence Browne Affair, 2017, etc.) pairs a dissolute, infamous rake with a prim merchant from the Colonies who climbed the social ladder via his sister’s good marriage and his own calculatedly impeccable behavior. “Stuffy, smug, and terribly concerned about what everybody else thought about him,” Julian Medlock is horrified that his sister Eleanor, an eccentric scientist, has allowed her London home to be overrun with revelers, including Lord Courtenay, the thinly disguised subject of a scandalous novel. When Eleanor asks Julian to help smooth Courtenay’s re-entrance into London society, he fears for both his own social standing and his ability to resist the rogue’s charms. Sebastian’s third novel, like the first two, tells the love story of two queer men in Regency England without making their sexuality central to their characters or the plot. Rather, what keep Sebastian and Courtenay emotionally distant are the pasts they cannot face and the secrets they harbor. On the surface, this is an opposites-attract story, but Lord Courtenay and Julian Medlock have both created public personas to mask deep losses and painful regrets. Sebastian’s character-driven novel is sensuously romantic yet grounded in its approach to human relationships, where sometimes concern for others and self-criticism mask selfishness and immaturity. The tone remains light, with sharp and often funny exchanges between the protagonists sprinkled throughout. Similarities between the protagonists are a little too on the nose, and a midnovel wrinkle feels out of character and unnecessary. Sebastian’s regular readers will enjoy the seamless way memorable characters from her first two novels appear here and will long for a stand-alone book that develops Eleanor’s intriguing relationship with her estranged husband.

Sebastian upends Regency romance conventions in this sensual, emotional, and upbeat take on the rake/wallflower trope.