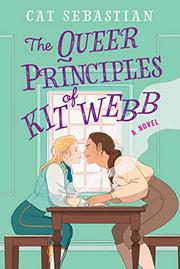 THE QUEER PRINCIPLES OF KIT WEBB

A retired 18th-century highwayman who hates the aristocracy is tempted when a handsome nobleman approaches him for one last job.

Kit Webb’s days as a highwayman are behind him. In his last job, he lost his best friend and permanently injured his leg so that he can barely walk or ride a horse—losses that threaten to overwhelm him with grief. He now spends his time running the coffee shop he owns in London. He’s bored and surly and itching for adventure. Then Edward Percy appears at the coffee shop, dressed to the nines and full of silly chatter and brazen flirtation. Percy wants to hire Kit to hold up his father’s coach, hoping to gain leverage that will force his father to do right by his young second  wife and daughter. Persuading Kit gives Percy the perfect excuse to haunt the coffee shop for weeks, sometimes dressed like a lord in silks and satins, with a powdered wig and a ridiculous heart-shaped beauty patch, and sometimes dressed more anonymously in a commoner’s clothes. Either way, Kit can’t keep his eyes off Percy. The sexual tension is thick in Sebastian’s latest historical romance. Both men are lonely. Both men have learned how harsh the world can be. And both of them are caught by surprise when sexual attraction turns into something more tender. Sebastian’s prose is entertaining and delightful, with many steamy scenes in which the two heroes fight each other with fists, knives, and swords to train for their upcoming robbery attempt. It’s also full of intelligent and thought-provoking political debates, with Kit holding forth on the evils of the English class system and Percy confronting his own privilege and thinking about who, exactly, he wants to be.

An irresistible story of love and adventure that will delight both newcomers and regular readers of queer romance.