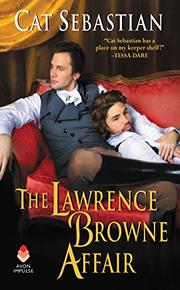 A London swindler falls for his mark, a mad earl, in this Cornwall-set Regency romance.

As Penkellis Castle falls to ruins around him, Lawrence Browne, the Earl of Radnor, hides in the tower, working feverishly on inventing a telegraphlike device. His servants have fled, the villagers think he’s demonic, and Lawrence himself is convinced the madness and depravity that consumed his father and brother will claim his life as well. This gothic setup is punctured when professional confidence man Georgie Turner arrives on Radnor’s moldering doorstep, posing as a secretary. Georgie recently aborted a lucrative assignment thanks to a sudden bout of conscience, a development his furious boss would like to properly, and violently, acknowledge. He’s not impressed with the Mad Earl: “I had hoped for some good old fashioned howling at the moon, and all you do is build ingenious inventions and eat too much ham.” Georgie is beautiful, slender, and graceful to Lawrence’s bearded, hulking form. Lawrence dismisses his cool and neat secretary as a London dandy, but Georgie, a swindler practically from his birth in the slums of London, quickly, and astutely, assesses the situation and begins putting Penkellis to rights while at the same time appraising its valuables. Sebastian (The Soldier’s Scoundrel, 2016) nicely contrasts Georgie’s frankness and sexual openness with the deceitfulness at his core. Sebastian infuses a romance that could have been dark with a constant thrum of mild humor and steady wonder: “Then Radnor flashed him one of his rare smiles, and Georgie felt simultaneously like he had been given a precious gift and like he had been hit in the head with a shovel.” Lawrence’s character is complicated by social anxiety and sexual shame over his “perverse tastes”: a thornier nest of issues than “madness” but an easier one to untangle. Georgie’s change of heart is less effective because he was never much of a convincing scoundrel, but readers will be thrilled by the way his empowering love for Lawrence comes back to him in a time of need.

In a crumbling castle in Cornwall, two inauthentic men from vastly different registers of Regency society find in each other an authentic and passionate love. Another exquisitely written, deeply romantic novel from Sebastian.