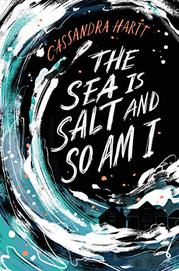 THE SEA IS SALT AND SO AM I

After another storm in West Finch, Maine, withdrawn artist Tommy MacQueen attempts suicide while on a swim. His survival triggers events that change both his future and those of his confident twin, Ellis, a bisexual amputee and track star, and Ellis’ best friend, activist Harlow Prout. Estranged ever since Harlow entered their lives and drawn further apart by Tommy’s depression, the MacQueen brothers struggle to regain their childhood bond. Harlow begins a secret relationship with Tommy out of pity, but what’s meant as a distraction becomes a tender romance between the formerly bitter enemies. Harlow and Ellis’ volatile friendship is given equal weight in the narrative: Vacillating between codependency and profound devotion, their relationship is the novel’s heart. Insular West Finch is as atmospheric and colorful as Tommy’s paintings, overshadowed by the acceptance of its own eventual destruction through coastal erosion. Hartt is uninterested in easy answers, unspooling mysteries and emotions that shift what we thought we knew about characters caught in realistically nonlinear growth. The points of view are specific and well realized, with belligerent, loving Harlow, a fixer unable to stop breaking things, being a particular standout. Tommy’s recovery proceeds in complicated fits and starts; his depression is portrayed with sensitivity. Main characters default to White.

A melancholy and thoughtful debut.