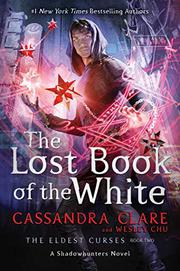 THE LOST BOOK OF THE WHITE

From the Eldest Curses series, volume 2

“Malec” and friends go to Shanghai in this spinoff series sequel.

A peaceful night (infant son asleep, sailor pajamas on, book in lap) turns rowdy when intruders break into Magnus Bane’s Brooklyn apartment. Shinyun Jung appears with Ragnor Fell, Magnus’ old friend whom he thought to be dead. The two warlocks are working on a project together—something involving Sammael (the Father of Demons) and the Book of the White (which they’ve just stolen from baby Max’s room). Before departing nearly scratch-free, Shinyun “gifts” Magnus by stabbing him with a weapon called the Svefnthorn and leaving a glowing hole in his chest. Magnus and Alec Lightwood rally the rest of the Shadowhunter crew to retrieve the book and prevent this scheme from reaching completion. But between misbehaving portals, a mysterious magical injury, and excessive demons, can they save the world again? And who will watch the baby? Though just as sexy as ever, the relationship between Alec and Magnus dips into sentimentality as they balance newfound parenthood with their thirst for adventure—and each other. Despite high stakes, heroes and villains alike adopt a witty, almost jovial disposition that makes the plot read like a romantic, but dangerous, vacation. The incorporation of Chinese Shadowhunters, gods, demons, and realms deepens the series’ mythology. Multiple forbidden relationships between Shadowhunters and Downworlders symbolically echo the fight for marriage equality.

Plenty of fan service within a rich setting.