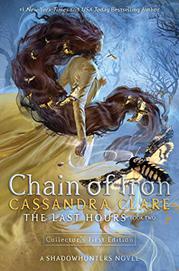 From the Last Hours series, volume 2

Both warring hearts and (literally) fiendish schemes keep the upcoming generation of demon-fighting Shadowhunters on their toes in this midtrilogy doorstopper.

Set in 1903 and centered on a love triangle involving the well-bred offspring of part-angel Nephilim last met in the Infernal Devices series, this episode carries on from Chain of Gold (2020) as golden-eyed James Herondale and Persian/British Cordelia Carstairs, wielder of the legendary blade Cortana, are wed in what—due to the workings of various spells and ill-concealed feelings—they think will be only a marriage of convenience while third-wheel Grace Blackthorn uses her power to cloud people’s minds and further the machinations of her deranged foster mother. Meanwhile, with Nephilim suddenly being slaughtered Jack the Ripper–style and other mysterious doings in the background, friendships are tested amid the efforts of supporting cast members to follow the leads in chaste but steamy couplings, requited and otherwise, same-sex and otherwise, even living and…otherwise. A brief but desperate climactic battle drives off a demonic incursion, but worse is plainly to come. “The gods are walking,” a character remarks, “and none of us are prepared.” Also, as an emotionally wracked James reflects in the aftermath, “We suffer for love because love is worth it.” The wealthy, cosmopolitan cast of Londoners includes some ethnic diversity. Illustrations not seen.

Full measures indeed of love and suffering…and bloodshed too: Fans will sail through and clamor for more.