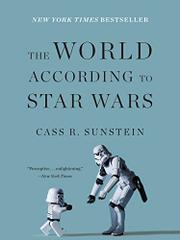 THE WORLD ACCORDING TO STAR WARS

An exploration of how Star Wars “illuminates childhood, the complicated relationship between good and evil, rebellions, political change, and constitutional law.”

Sunstein (Conspiracy Theories and Other Dangerous Ideas, 2014, etc.) is a Harvard law professor and has served as an adviser to President Barack Obama; he is also a Star Wars fanatic. The author offers close readings of the movies, script decisions, their novelizations, and the fan fiction inspired by them, and he inflates it all to mythmaking worthy of Joseph Campbell’s scrutiny. “In all of human history, there’s never been a phenomenon like Star Wars,” writes Sunstein. “Fueled by social media, the whole series has a cult-like following, except that the cult is so large that it transcends the term. It’s humanity, just about.” Even for those few who lie outside that “just about,” this analysis engages with its broader themes about fathers and sons, timeliness and timelessness, destiny and free will, tradition and rebellion, God(s) and mankind. Though the author shows some academic rigor he largely avoids scholarly jargon except for the occasional “Let’s try to unpack it.” Sunstein is plainly writing for those who are equally invested in Star Wars and who want to learn more about how the franchise came about, why no one envisioned the scope and scale of its success, why it spoke specifically to its times and has continued to resonate, and how it encompasses spiritual, political, and psychological dimensions. What began as something of a homage to Flash Gordon has become, in the author’s eyes, a text through which we can decode all the issues of the modern world. “Here are thirteen ways of looking at Star Wars,” he writes. “Most of them have plausible sources in the movies. A few of them are nuts but still smart—which makes them especially interesting.”

Certainly odd but also smart and interesting. For any student who wants to write a term paper on Star Wars, this book could serve as a rich resource.