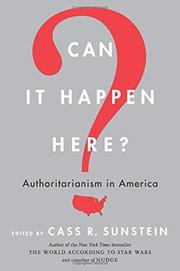 CAN IT HAPPEN HERE?

A renowned legal scholar assembles a dream team of other legal authorities and cultural and political analysists to ponder the title, substance, and current relevance of It Can’t Happen Here (1935), Sinclair Lewis’ provocative novel about the rise of fascism in America.

The 17 essayists here tend to agree on a couple of fundamental points. First, it’s not likely that American democracy will implode and a fascist phoenix will arise from the ashes, but it is still possible. Second, Donald Trump is ignorant and dangerous. The writers take a variety of approaches to the titular question. Some look at key moments in American history when the country did step away from its professed adherence to liberal democracy—e.g., Abraham Lincoln suspending habeas corpus; Jim Crow in the South; the roundup of Japanese-Americans after Pearl Harbor. There are essays about the importance of the legal system in a democracy, which is not surprising since most of the essays are by legal scholars; how a would-be dictator could proceed in the United States (slowly); the current factors that are worrisome, including low voter turnout, public ignorance of the issues, polarizing media and social media, the dominance of a two-party system; and significant historical parallels (the rise of Napoleon III). Oddly, none of the essayists discuss slavery or Native American reservations; nor does anyone say much about the fractured system of public education that makes it almost impossible for poor communities to afford to educate their children. But what they do discuss is worrisome and more than a bit depressing. Although most of the essayists are moderately sanguine about our survival, most see a pathway that a patient autocrat could take to delete and/or attenuate key Constitutional provisions—especially those most precious freedoms of speech and the press.

Cautionary pieces well-informed by history, legal theory, and patriotism, all bubbling in a cauldron of anxiety.