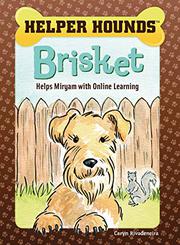 From the Helper Hounds series

A child who can’t safely return to in-person schooling learns focus from a well-trained Lakeland terrier.

Despite all his “zoomies” and “wiggles,” Brisket is an excellent Helper Hound. After he was adopted by Luke, a White American man then living in London, Brisket became a medal-winning pup in his obedience drills. Now he and Luke live in America and work in animal-assisted therapy. Wearing his Helper Hounds vest, Brisket demonstrates his focus and attention for Miryam, an immunocompromised child who can’t return to normal school yet. In the illustrations—which depict adults rather like tall children—Miryam and her father, Malik, have pale skin and straight, dark hair. Luke explains to them how the skills that make Brisket excel at obedience drills might also help Miryam with remote schooling. Frequent breaks for Miryam and Brisket to run and play (getting their “zooooooomies out”) keep this story from becoming a lesson in how a child should behave like an obedient pet. Illustrations of Luke, Miryam, and Malik wearing masks, together with discussion of both children with health concerns and the difficulties of remote schooling, provide value for readers whose early education has been so utterly strange. One major continuity problem and some indifferent prose aside, reading about Miryam’s problems could comfort readers who’ve experienced the strangeness of pandemic school and medical fears. Tips on focusing and further facts about Lakeland terriers follow the story. Series companion Louis Helps Ajani Fight Racism publishes simultaneously.

For instructional, therapeutic reading, with a dog narrator as the spoonful of sugar.