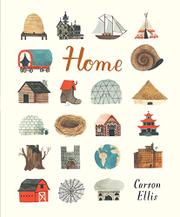 Ellis, known for her illustrations for Colin Meloy’s Wildwood series, here riffs on the concept of “home.”

Shifting among homes mundane and speculative, contemporary and not, Ellis begins and ends with views of her own home and a peek into her studio. She highlights palaces and mansions, but she also takes readers to animal homes and a certain famously folkloric shoe (whose iconic Old Woman manages a passel of multiethnic kids absorbed in daring games). One spread showcases “some folks” who “live on the road”; a band unloads its tour bus in front of a theater marquee. Ellis’ compelling ink and gouache paintings, in a palette of blue-grays, sepia and brick red, depict scenes ranging from mythical, underwater Atlantis to a distant moonscape. Another spread, depicting a garden and large building under connected, transparent domes, invites readers to wonder: “Who in the world lives here? / And why?” (Earth is seen as a distant blue marble.) Some of Ellis’ chosen depictions, oddly juxtaposed and stripped of any historical or cultural context due to the stylized design and spare text, become stereotypical. “Some homes are boats. / Some homes are wigwams.” A sailing ship’s crew seems poised to land near a trio of men clad in breechcloths—otherwise unidentified and unremarked upon.