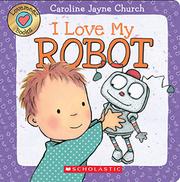 I LOVE MY ROBOT

From the Love Meez series

For readers named Henry whose favorite snuggle toys are robots, this may be the perfect board book—or it may just be another cloying offering in Church's Love Meez series. In rhyming first-person text, Henry, a precocious, white toddler with a mop of reddish-brown hair, describes his robot friend and the imaginary adventures they have together. The first page features a wheel to rotate with rainbow dots on the recto and coppery stars on the verso that glimmer as the wheel turns. A mirror on the next double-page spread lets children “see” themselves in the book. Tiny, tearable flaps hide the sounds Robot makes as he falls asleep. Irregular syllable counts make the rhyming text awkward to read aloud. Crucially, the book loses its toddler voice when the narrator says, “Although he's not a person, / Robot's my special friend, / The fun and games we have together / I know will never end.” I Love My Bunny, published simultaneously, follows the same format, with soft-touch bunny tail, scratch-and-sniff cookies, glittery bubbles, and a soft swatch of blanket on the last page. Both reinforce gender stereotypes: boys blast off with robot adventures, and girls host tea parties.

Look elsewhere for board books that don’t seek to confine children to stereotypes at the toddler stage.