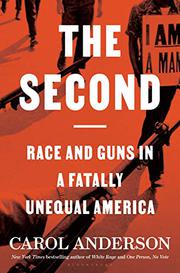 Race and Guns in a Fatally Unequal America

The author of White Rage (2016) returns with a powerful consideration of the Second Amendment as a deliberately constructed instrument of White supremacy.

“The Second is lethal,” writes Emory historian Anderson: “steeped in anti-Blackness, it is the loaded weapon laying around just waiting for the hand of some authority to put it to use.” In 1906 in Atlanta, where Emory is located, one such use was made when a White mob attacked Black businesses and neighborhoods in a kind of mass lynching. “Let’s kill all the Negroes so our women will be safe,” yelled one instigator. When armed Black citizens responded, the Georgia government immediately sent in the cavalry, not to protect the neighborhoods but to suppress what was tantamount to a modern slave revolt. And it was precisely to suppress revolts, Anderson argues, that the “well-regulated militia” language of the Second was formulated. Militias and slave patrols were one and the same in several Southern colonies and then states, and only Whites could enlist, meaning that only Whites were legally allowed to carry firearms. Indeed, as Anderson carefully documents, many states specifically forbade Blacks from owning or carrying firearms, even after emancipation. Many leaders in the Southern states were fearful because of the success of the Haitian revolution, which, though inspired by both the French and American revolutions, also extended suffrage and political power to free Blacks. The Second Amendment, writes the author, helped reinforce the Constitution’s “three-fifths” clause, a means of disempowering Blacks politically forevermore. Today, the racial component of the Second is starkly revealed in police shootings and the National Rifle Association’s reticence to defend Black gun owners and police victims even while leaping to the defense of 17-year-old Kyle Rittenhouse, whose attorneys tellingly claimed that he was a member of a “well-regulated militia.” Writing evenhandedly and with abundant examples, Anderson makes a thoroughly convincing case.

An urgent, novel interpretation of a foundational freedom that, the author makes clear, is a freedom only for some.