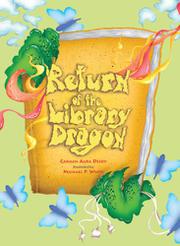 RETURN OF THE LIBRARY DRAGON

Miss Lotty, librarian at Sunrise Elementary School, was once a scaly, book-protecting, fire-breathing dragon, but years ago student Molly Brickmeyer helped melt the scales away by proving children can be trusted with books. Now, Miss Lotty is ready to retire. Though the kids will miss her, she’s sure her successor will carry on her library traditions. Unfortunately, when she arrives for her last day before retirement…Mr. Mike Krochip has replaced all her books with computers and e-readers. The kids profess their love of traditional books until they see the bells and whistles on the e-readers, triggering the return of the Library Dragon, who chomps through every piece of technology she sees until a young redhead saves the day (and the library) again. Deedy and White re-team to bring the Library Dragon into the 21st century. As an entertaining read that broaches the subject of technology’s place in the school media center, this deserves a place alongside its predecessor despite the fact that the resolution of the central conflict is about as realistic as a dragon in the library. White’s brightly colored, squashed and squiggly full-bleed illustrations match the tale for good goofiness.

Pro-book and -library quotes on the endpapers and multiple punny book titles in the illustrations add an extra touch of fun.