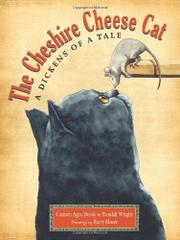 A Dickens of a Tale

“He was the best of toms. He was the worst of toms.” And for all his harsh early life and unnatural dietary preferences, ragged London alley cat Skilley gets to look at a queen, too.

Landing a gig as mouser for the chophouse and writers’ hangout Ye Olde Cheshire Cheese is a lifelong fantasy come true for both Skilley and the inn’s swarm of resident mice—because unlike his feline rivals, Skilley adores cheese and has no taste for mice at all. In fact it isn’t long before he and Pip, a mouse of parts who has learned to read and write, have become great friends. Deedy and Wright take this premise and run with it, tucking in appearances from Dickens, Thackeray and other writers of the time. Cat and mice unite to face such challenges as the arrival of a cruel new cat named Oliver (“Well, this was an unwelcome twist”), a mysterious cheese thief and, climactically, a wise but injured old raven that is the subject of a country-wide search that culminates in a visit to the inn by Queen Victoria Herself. Moser contributes splendid black-and-white illustrations that manage to be both realistic and funny, recalling Robert Lawson while retaining his own style.

Readers with great expectations will find them fully satisfied by this tongue-in-cheek romp through a historic public House that is the very opposite of Bleak.