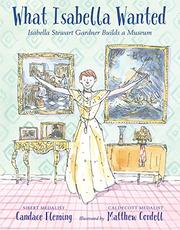 From the mixed-up files of Isabella Stewart Gardner.

In 1867, Isabella fell in love with art and started collecting paintings, sculpture, furniture, and other objects, sometimes having them smuggled into the United States in the way of many superrich art collectors. She eventually decided to build a home within a museum, and for over 20 years, she opened it annually for 20 days, also displaying her personal paraphernalia. She willed it all to the people of Boston, and after her death, the building became a full-time museum. Everything remained as she’d left it—until a mystifying robbery occurred in 1990. Playful, accessible text and engaging illustrations that feature an all-White cast until they reach the present day tell her story, which will be of particular interest to museum visitors. The entitlement she enjoyed (she began collecting during the U.S. Civil War while on a cruise to recover from her young son’s death, and her wealth seemingly enabled her to overcome barriers she may have faced as a woman) is not explicitly mentioned, nor are the many writers and artists—many of them gay—whom she regularly entertained. However, her unconventional nature and love of art are engagingly portrayed, and the unsolved theft of her art reads as a mystery worthy of her scandalous legacy. (This book was reviewed digitally.)

An inviting portrait of a privileged and unconventional woman who shared herself and her art collection with the masses.