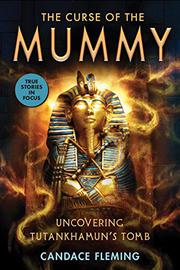 THE CURSE OF THE MUMMY

The oft-told story of the discovery of Tutankhamun’s tomb is framed around the purported curse of the pharaohs.

In 1906, in British-occupied Egypt, the wealthy, occult-loving Earl of Carnarvon hunted treasure in the Valley of the Kings. He met Howard Carter, a mildly disgraced archaeologist, and the two began a long partnership that started with the meager excavation of picked-over sites and culminated with the most glamorous discovery in all of Egyptology. The two Englishmen who dug up the people of ancient Egypt were professionals and aristocrats who dined in luxury on crystal and china while their Egyptian workers remained unnamed, their opinions unheard. But the 1922 discovery of the lush treasures of King Tut’s tomb, described in loving, fascinating particulars and illustrated in well-chosen photographs, is situated here amid something Carter and Carnarvon barely noticed: the nationalism of interwar Egypt and rising anger toward the colonial British occupiers who allowed them access to the tomb. Unfortunately, each chapter concludes with a section that opens with “it was said” and proceeds to detail bad omens and terrible events that befell people who had even tangential connections to the tomb or its treasures. A final chapter states that the mummy’s curse doesn’t exist, but the earlier maunderings feed into Orientalist tropes and don’t fit with the overall historical narrative—a straightforward telling of Carter’s excavations.

A solid retread of familiar ground marred by the frequent evocation of a tired trope.