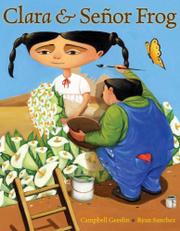 A little Mexican girl recognizes real magic in the work of a friendly artist. Clara yawns through El Mago’s act every night, even when he saws her mother in half: She knows it’s not magic, just trickery. But when she and her mother visit her Tía at the gringo’s house where she works, Clara sees a painting that makes her believe it is real: “That is magic!” Geeslin lets Clara tell her tale simply, her little-girl perspective allowing her to see that the Señor Frog who has fallen in love with her mother is famous, but appropriately focusing on the marvels that he paints—and teaches her how to paint, too. Newcomer Sanchez works his own magical realism into his illustrations, indicating Clara’s artistic kinship with the painter Miguel by making her even more frog-like than her mentor, her huge eyes noticing everything around her. The playful, highly saturated oils evoke the bright heat of Mexico, and exaggerated perspectives emphasizing the monumental nature of Señor Frog and his work. A quietly perceptive celebration of the synergy between observation and imagination necessary for great art. (Picture book. 4-8)