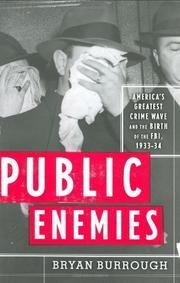 A rollicking, rat-a-tat ride with Clyde Barrow, Ma Barker, and a raft of inept (but a few first-rate) G-men.

Though J. Edgar Hoover argued otherwise—and wrote gainsayers out of the official histories—his fledgling FBI was a thoroughly politicized bureaucracy just like any other, torn by rivalries and full of guys who just couldn’t handle the work. (And so, it appears from recent testimonials before Congress, it remains.) Hoover’s agents were ill-equipped to handle the flood of violent crime that washed over the nation in the first years of FDR’s administration—which, Vanity Fair correspondent Burrough notes, “wasn’t the beginning of a crime wave, it was the end of one.” Where bank robbery had been comparatively rare, those years saw an explosion of attacks across the country, mostly in rural settings; committed by men and women such as Bonnie Parker, John Dillinger, and Machine Gun Kelly, they met with public understanding, if not approbation, for the economy had tanked, and the public blamed bankers for the hardships they now had to endure. Part of Hoover’s mission in declaring open warfare on these criminals, writes Burrough, was to battle “the idea of crime, the idea that too many Americans had come to tolerate crime.” Given the celebrity that the likes of Ma Barker and Pretty Boy Floyd came to enjoy, Hoover surely had a point, even though he and his boys got it wrong much of the time; Ma Barker, to name one putative public enemy, decried as the murderous, machine-gun-spraying brains of a monstrous ring, “wasn’t even a criminal, let alone a mastermind.” But plenty of the people the G-men went after were criminals, sometimes even masterminds, and very dangerous, just as likely to gun down passersby as cops and bank dicks; as Burrough writes, Baby Face Nelson in particular lives up to his reputation: “a caricature of a public enemy, a callous, wild-eyed machine-gunner who actually laughed as he sprayed bullets toward women and children.”

Iconoclastic and fascinating. A genuine treat for true-crime buffs, and for anyone interested in the New Deal era.