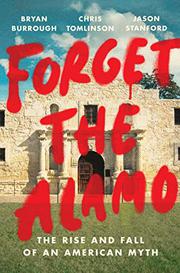 The Rise and Fall of an American Myth

A zesty, journalistic, half history, half sendup about the battle of the Alamo and the myths that cling to it.

Setting out to distinguish ascertainable fact from Texas tub-thumping, Burrough, Tomlinson, and Stanford, all Texans, succeed brilliantly in their intent. Their focus is the famed 1836 battle for control of San Antonio’s fabled fortress and its role in the mythology of the Lone Star State. In this evenhanded popular history, the authors situate the war for Texas’ independence from Mexico as a fight for the preservation of slavery by Anglo Texans. The fact that Santa Anna and his followers, as well as the Tejanos (Texans of Mexican birth), were “ardently abolitionist” foes of slavery is only one of the book’s many punches to received wisdom. Some of the fort’s famous defenders come off poorly. Jim Bowie was “an amazingly brazen swindler. Had he stayed in the United States, there’s a decent chance he’d have ended up swinging from a rope.” Davy Crockett didn’t die a “glorious death”: “The Alamo’s trapped defenders died for pretty much nothing.” What the authors call the “second battle of the Alamo” has focused not on slavery but on what the events of 1836 do and should mean to Texans. Laying waste to many previous historians of the events, the authors leave readers amused as well as informed. The entertaining story contains multitudes: Disneyland, John Wayne, JFK, LBJ, and, of course, the Bush political dynasty. Since the 1970s, this battle has been joined by American Latinos, whose ancestors are finally gaining their well-deserved recognition in Texas history through “Alamo revisionism”—a direct, important challenge to the “Heroic Anglo Narrative of the Alamo.” Despite a bit too much chattiness and some unnecessary vulgarity, this lively book is sure to cause plenty of interesting conversations in Texas.

An iconoclastic, romping, bull’s-eye volley at an enduring sacred cow—popular history at its most engaging and insightful.