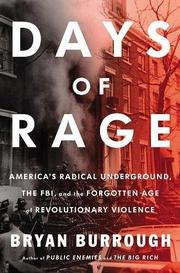 America’s Radical Underground, the FBI, and the Forgotten Age of Revolutionary Violence

A stirring history of that bad time, 45-odd years ago, when we didn’t need a weatherman to know which way the wind was blowing, though we knew it was loud.

The 1970s, writes Vanity Fair special correspondent Burrough (The Big Rich: The Rise and Fall of the Greatest Texas Oil Fortunes, 2009, etc.), saw something unknown since the American Revolution: a group of radical leftists forming “an underground resistance movement” that, as his subtitle notes, is all but forgotten today. The statistics are daunting and astonishing: In 1971 and 1972, the FBI recorded more than 2,500 bombings, only 1 percent of which led to a fatality. In contrast to the Oklahoma City bombing of 1995, which killed 168 people, the “single deadliest radical-underground attack of the decade killed four people.” The FBI, of course, took this very seriously. As Burrough records, it embarked on a campaign of infiltration and interdiction that soon overstepped its bounds, legally speaking. The author takes a deep look into this history on both sides, interviewing veterans of the underground on one hand and of the FBI on the other. He traces the bombing campaign back to the man he deems a “kind of Patient Zero for the underground groups of the 1970s,” who began seeding Manhattan with bombs in the year of Woodstock and provided a blueprint for radicals right and left ever since. It is clear that the FBI has Burrough’s sympathy; after all, many of those who went underground got off lightly, while overly zealous federal agents (the man who would later be unmasked as Watergate’s Deep Throat among them) were prosecuted. The author’s history is thoroughgoing and fascinating, though with a couple of curious notes—e.g., the likening of the Weathermen et al. to the Nazi Werewolf guerrillas “who briefly attempted to resist Allied forces after the end of World War II.”

A superb chronicle, long—but no longer than needed—and detailed, that sheds light on how the war on terror is being waged today.