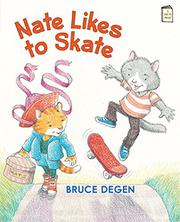 Nate, a gray, skateboarding kitten, and Kate, an orange kitten enamored of hats, experience a bobble in their friendship. Words in the “-ate” and “-at” word families are used repeatedly. Nate, skate, great, grate, hate, gate, wait, and late, and hat, that, flat, and even brat are repeated often enough that beginning readers will start to recognize and anticipate them and eventually read them. Observant readers will also find some of these words or their variants in the first few illustrations. The 33 sight words are all one syllable and are also used repeatedly. The book succeeds admirably as a beginning reader. Its success as a picture book is more problematic. The story is slight, and the central conflict—hurt feelings between friends—is quickly and arbitrarily resolved with Nate’s and Kate’s mutual apologies when feelings are hurt and subsequent appreciation of each other’s enthusiasms. Thankfully, this is accomplished without any preachy adult intervention. Some grown-ups may be uncomfortable with the recurrence of “hate” and “brat,” but children will appreciate the unvarnished feelings.