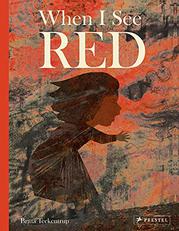 WHEN I SEE RED

From Germany, a story about feeling the emotions of anger and rage.

While there is no gender given for the narrator, the illustrations show a pale-skinned child in a dress, and readers may assume that, since females are often discouraged from showing anger, this book is particularly directed at girls. Paired with evocative, somewhat abstract illustrations that evoke the feelings the narrative exhorts, the child describes being “blinded by fury / …furiously mad.” A little later, “howling / roaring / whistling / … / gushing / pouring / twisting,” the child declares, “Rage unleashes a power I cannot ignore.” The words themselves tumble down the page in large type, and their placement and size, as well as their meaning, are effective at generating the spirit of rage and anger. The transition from the child’s red anger and rage to letting it go is, fabulously, depicted first as crashing waves and then as a panther the child rides astride. The ever smaller type used reiterates this new calm alongside puffy clouds in a blue sky. But while acknowledging that women’s anger is important and vital, this book’s treatment may go over the top. Rage is not the same as anger, since it lacks anger’s control, and a story that validates rage may be validating destructive and self-destructive behavior. That said, the illustrations and the narrative do an outstanding job of delivering their message. (This book was reviewed digitally.)

A superbly designed book that validates anger and its extreme sibling, rage.