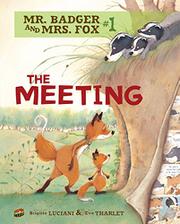 From the Mr. Badger and Mrs. Fox series, volume 1

Wooden dialogue weighs down this woodsy graphic tale of two single-parent families getting together. Routed out of their den by hunters, Mrs. Fox and her daughter, Ginger, wangle an invitation to stay the night with Mr. Badger and his kits, Grub, Bristle and the baby. The grown-ups click immediately; the young folk—particularly hostile, unsocialized only-child Ginger—start off, at least, at war. Arranged in squared-off graphic panels, several to a page, Tharlet’s uncluttered, fluidly brushed watercolor scenes are easy to follow as the young folk squabble about games and other issues but eventually come together over plans for a big moving-in party. Unfortunately the conversation as translated by Burrell too often runs to blocky lines—“We cannot return to our burrow. It is all destroyed”—and there is little suspense about the eventual outcome, giving this purposeful but promising series an uneven start. Still, it’s hard not to warm up to characters named Bristle and Grub; here’s hoping things smooth out in future entries. (Graphic animal fantasy. 6-8)