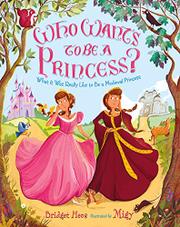 WHO WANTS TO BE A PRINCESS?

What It Was Really Like to Be a Medieval Princess

by Bridget Heos ; illustrated by Migy

Text and Disney-esque artwork contrast the “typical” fairy-tale princess’s way of life and that of a real (though fictional) princess in medieval Europe.

“Psst…you in your tiara and twirly dress. You look like you’re dreaming of being a princess like Cinderella. Or Snow White. Or Sleeping Beauty.” The princess peering out of a mirror, who looks exactly like the white, pink-gowned princess looking in except for her brown dress, introduces herself as Beatrice—a “very real” princess from the Middle Ages who will reveal her life “versus a fairy-tale day.” The book falls flat for several reasons. From the start, the sole benchmarks for fairy tales appear to be only the aforementioned princesses. How else to contrast singing to forest animals with practicing riding and archery? Or “Princess Charm School” with French lessons from a tutor? The art’s cartoonish renderings minimize opportunities for real contrast by constantly showing the fairy-tale life in bright pinks and medieval life in earth tones. There are a few facts that might be new for some readers, such as the itchy wool of Beatrice’s everyday dresses, the polluted waters of moats, and the custom of arranged marriage. Although princesses of color appear in minor roles in some of the fairy-tale scenes, wholly absent from the “real” history is the fact that the world beyond Europe existed during the medieval period. Oddly, a realistic contrast to fairy-tale knights is avoided, and a double-page spread of a “realistic” feast seems not too different from fairy-tale feasts.

An unconvincing attempt to contrast fantasy with historical reality.