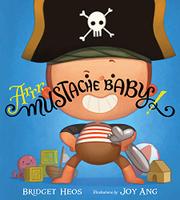 From the Mustache Baby series

The hirsute baby buddies (Mustache Baby Meets His Match, 2015, etc.) are back for more adventures!

Mustachioed baby Billy and bearded baby Javier are spending the day at the pool, a perfect place to explore the high seas and rescue shipwrecked passengers (a floating Barbie), save stranded whales (a sunbather lying next to the pool), and fight sea monsters (a snorkeling swimmer). They become fishermen and submarine scientists and Navy sailors….However, two pirates named Capt. Kid and Short John Silver have stolen treasure and are burying it on a deserted island (the sandbox). Sailors Billy and Javier recover the treasure and start to return it to its rightful owners when: Pirates attack! During the resultant duel, Billy’s mustache grows long and curly and Javier’s beard gets pointy—suddenly they are “bad guy” pirates too! Their greed is their undoing, and they are put in the dungeon (separate pack and plays). When they wake, they do everything to become heroes again…even befriend Capt. Kid and Short John Silver. This silly tale of hairy-faced babies who are bad some of the time and learn from their mistakes, Heos and Ang’s third outing together, is a good addition to pirate storytimes or hairy-baby collections. In Ang’s stylized digital illustrations, Billy presents white, presumably Latinx Javier is light brown; Short John Silver is black; and Capt. Kid has olive skin and a fluffy black bob.