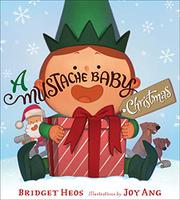 In this fourth book about Mustache Baby (aka Baby Billy), his pal Baby Javier transforms into Santa Baby when his facial hair (he was born with a full beard) turns white. This makes him “Santa’s #1 helper, Santa Baby!” Wanting to get in on the action, Baby Billy offers to help by making toys. Unfortunately, he likes his creations so much that he ends up hoarding them and earning a spot on the naughty list. His mustache transforms into a handlebar-style, or “BAD GUY MUSTACHE”—a somewhat fuller version of the one Snidely Whiplash sports in Rocky and Bullwinkle cartoons. Santa Baby is so angry at his friend’s greed that his beard turns into a “MAD GUY BEARD,” and he “saddle[s] up the reindeer” (depicted as dachshunds) to pursue Baby Billy and recover the treats he’s stolen. A misaimed snowball hits one of the “reindeer,” which prompts the pair of babies to reconcile and care for the pup. Santa Grownup sees their compassionate deeds and rewards them with a trip in his sleigh “to help deliver presents all over the world”—but only after twice checking his list to find that “Billy had made it onto the nice list by a hair!” of course. Throughout, readers are gifted with other examples of wordplay and with comical details in the digital art. Illustrations depict Baby Billy and Santa Grownup as white; Baby Javier is presumably Latinx.