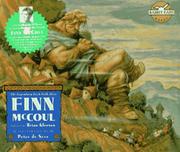 Out of the third century a.d. comes Finn McCoul (a.k.a. Finn MacCumhaill to Celtic folklore purists), the gentle giant of Belfast, and his crafty wife, Oonagh. The only blot on Finn's landscape is Cucullin, a giant bully who wishes to give Finn a good pulping. Oonagh devises a scheme that both saves Finn from the drubbing and takes all the stuffing out of Cucullin. Gleeson (Koi and the Kola Nuts, 1992, etc.) brings polished, sprightly writing and an amusing dash of contemporary corn to this adaptation of the ancient Irish tale. De Seve's illustrations provide a felicitous match; he is technically sharp, a painter who brings enticing tension by playing the heroic off the mock-heroic, the romantic off the mock-romantic. His rendering of Cucullin is wonderful, like something Da Vinci might have envisioned in a bad dream. This collaboration is uproarious, a brain-fevered interpretation that's also smart as a whip. (Picture book/folklore. 8+)