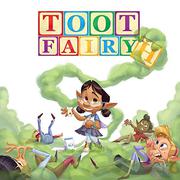 A lactose-intolerant tooth fairy saves the day in this gleefully gross picture-book debut.

Following one simple rule on the first day of tooth-fairy school shouldn’t be hard; all Irma has to do is avoid dairy, which will upset her stomach. But when she gets milk and crackers for a snack on the school bus, she doesn’t want to stand out. She drinks the milk but pays the price—squirming when she’s supposed to be paying attention in class, then letting “out a toot / that was long, loud, and smelly.” The other kids laugh, and the teacher scolds Irma, reckoning that a flatulent fairy won’t be able to collect teeth unnoticed. At every turn, Irma fails—until a too-high window has the tooth fairies stymied and Irma’s toots save the day. This book’s concept isn’t unique, but Donnelly’s sometimes-clever rhymes, which offer toot-related vocabulary (farted, flatulate), scan well, and designer/letterer Dukeshire lays out stanzas for easy rhyming despite omitted punctuation. Van Gool’s delightful illustrations have the feel of an animated cartoon; characters almost leap off the page. The tooth-fairy children share similar body types, but their skin tones are a range of colors. Irma’s flatulence is a fantastically gross green cloud sure to delight potty-humor fans.

This tale’s jokes and triumphant ending will delight young readers.