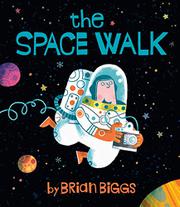 What better way to meet a new friend than taking a walk outside—even in space?

In a strangely familiar exchange, astronaut Randolph Witherspoon whines that he’s bored, and Ground Control grants permission for a stroll outside—as soon as he has lunch and cleans up his capsule. One warning: “Don’t talk to strangers!” A packet of mashed Brussels sprouts and a bit of housekeeping later, Randolph is out the hatch, floating in space that Biggs has festooned with swirly, polka-dot planets in party colors, and snapping pictures of various astro-wonders. When one of these last (looking like a tin can trailing a cluster of mechanical arms) displays a googly eye, it takes but a few big, wordless panels before astronaut and ET are happily orbiting each other, taking selfies together, and finally exchanging goodbye hugs. “Spacewalk complete!” Randolph informs Ground Control, asking if he can go out again later. “We’ll see in the morning.” It will not be lost on children that while Randolph may not actively talk to his unexpected companion, he does not seem to be observing the letter of Ground Control’s law. The porousness of this aspect of the narrative should lead to some interesting conversations between listeners and caregivers.

An effervescent outing with a refreshingly (or, in some quarters, distressingly) subversive message.