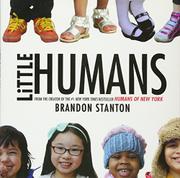 The creator of the popular Humans of New York blog focuses his camera lens on the diverse children of New York City.

Street photographer Stanton has captured the lives of many New Yorkers, but none ever this small, all in one place. “Little humans can do big things, // if they stand up tall / and hold on tight. // Sure, sometimes they fall. / But they get back up. // They’ll be alright!” Rhyming text highlights the resilience and varied experiences of childhood, accompanied by one large photo per phrase. Most are sidewalk portraits with concrete backdrops, but readers find a bit of grass every few pages—just like New York. Tiny hipsters in elbow-patched blazers share space with barefooted friends playing in a fire hydrant’s spray. Some readers might be inclined to say the more eclectic fashionistas are only found in New York City, but kids’ ensembles are often distinct and creative, no matter where they live. While the text is largely platitudinous, the photographs are so striking as to make it easy to ignore. A wide range of ethnic groups and smiles broadens the scope even further.

These humans may be little, but their photos bring large delight. (Picture book. 3-7)