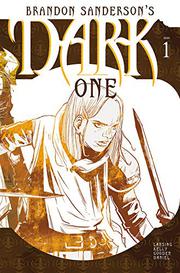 A 17-year-old faces his destiny in a divided and distant land.

Paul seemingly has a tenuous grip on reality. He sees visions of an unreal, fantastic land, and Nikka, a blue-tinted hallucination of a girl who claims to be his sister, insists on keeping him company. Living apart from his mother, with whom he has a strained relationship, Paul tries to keep up a normal life with frequent visits to his therapist. When a sword-wielding warrior disrupts a session, Paul is flung into Mirandus, the world of his visions. With a clear flow between panels, the implication of time passing in a montage of wide, epic scenes of Mirandus; brilliant and emotive color schemes; and a cleanly minimal drawing style provide a strong visual aspect to the story. Inexperienced graphic novel readers will easily be able to follow the flow of dialogue, and the clear depiction of speech and narrative bubbles provide further visual literacy cues. While the discussion of good versus evil is a bit heavy-handed despite attempts to subvert the binary, the overarching theme of destiny as depicted by the Narrative adds an intriguing twist. Paul’s relationships with Nikka and other characters are engaging, but the pacing makes them feel rushed. Paul is biracial (Chinese/White); the humans of Mirandus appear mostly White. (This book is available now as a digital edition, with print release currently scheduled for May 2021.)

A dramatically dark fantasy that will leave readers eager for the sequel.