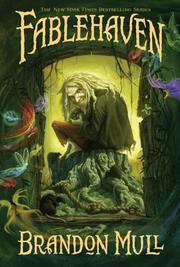 Witty repartee between the central characters, as well as the occasional well-done set piece, isn’t enough to hold this hefty debut together. Teenagers Seth and Kendra are dropped off by traveling parents at their grandfather’s isolated Connecticut estate, and soon discover why he’s so reluctant to have them—the place is a secret haven for magical creatures, both benign and decidedly otherwise. Those others are held in check by a complicated, unwritten and conveniently malleable Compact that is broken on Midsummer Eve, leaving everyone except Kendra captive in a hidden underground chamber with a newly released demon. Mull’s repeated use of the same device to prod the plot along comes off as more labored than comic: Over and over an adult issues a stern but vague warning; Seth ignores it; does some mischief and is sorry afterward. Sometimes Kendra joins in trying to head off her uncommonly dense brother. She comes into her own at the rousing climax, but that takes a long time to arrive; stick with Michael Buckley’s “Sisters Grimm” tales, which carry a similar premise in more amazing and amusing directions. (Fantasy. 11-13)