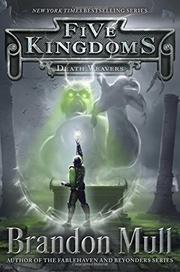 From the Five Kingdoms series, volume 4

Cole’s ongoing quest to rescue friends and find four lost princesses in the dreamlike Outskirts takes him to a land where the border between life and death is permeable.

Gaining and losing various allies and princesses as he goes, Cole journeys through both Necronum, populated by the living and also spectral “echoes,” and the “echolands,” a sort of borderland halfway house for the dead, on the way to a face-off with the demonic shapecrafter Nazeem. As if the cast wouldn’t already fill a bus, Mull trots in even more characters—including some from his Beyonders series—as he pushes his young hero into a drawn-out series of chases and races both afoot and atop a mysterious magical horse. The author spins a big, fluent, not entirely earnest yarn, but he seems to be stuck on certain plot devices. Infodumps (along with side topics like the meaning of life), for instance, are repeatedly delivered through extended question-and-answer sessions that read like magazine interviews, and so often does Cole hear some variation on “I don’t know, but I can tell you who might,” that even he finally slaps his forehead: “No offense, but do you know how many times I’ve heard this?” But, by the end Nazeem has been temporarily stymied, Cole has acquired shapecrafting powers of his own, and the ducks are queuing for the upcoming climax.

Much rushing about from here to there in this penultimate brick, but it’s basically a smooth ride to the closer.