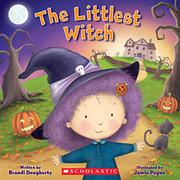 From the Littlest series

Wilma is a little witch who longs to be able to do bigger things.

Her small hands can’t control the broom to do the stunts for the demonstration at the Halloween bash, and they also can’t keep hold of the big jar of herbs she’s adding to her sister Hazel’s scream potion (it explodes in a “gooey green mess”). Those tiny hands also can’t catch a toad for a spell or tie up twigs for a new broom. Dejected, Wilma roams the Spooky Woods, where she meets Mae, who’s also sad; it seems that her family is sick and can’t do the mummy dance with her at the party. At least the friends can be together. But when the broom-flying demo goes wrong, it’s small Wilma, sitting atop Mae’s shoulders, who saves the day. Though the tale may strike a chord with kids who feel too small as well, this latest in the Littlest series feels like a formulaic retread of the earlier titles, concluding with a familiar moral extolling friendship. Pogue’s cartoon illustrations have an animation aesthetic. The adorable Halloween characters are wildly diverse and nonscary, with skin of all hues, including green and purple. The book includes stickers to use in decorating—there are no indicated places for them in the book.

A familiar tale with a Halloween makeover.