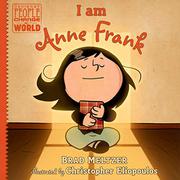 I AM ANNE FRANK

From the Ordinary People Change the World series

A bobblehead avatar of the teenage writer and symbol of the Holocaust presents her life as an inspiration.

From a big-eared babyhood and a childhood spent “writing stories” to fleeing Germany for Amsterdam, Anne’s pre-Annex life is sketched. Narrating in the first person, the cartoon Anne explains that Nazis “didn’t like those of us who were Jewish or other groups who were different from them.” Hitler is presented as a leader “who blamed the Jews for all of Germany’s problems, even though we hadn’t done anything wrong.” Then in short order Anne receives her diary as a birthday present, the family goes into hiding, and Anne finds solace in the attic looking at the chestnut tree and writing. Effectively, Annex scenes are squeezed between broad black borders. Illustrations present four snippets of quotes from her diary, including “I still believe, in spite of everything, that people are truly good at heart.” Narrator Anne says, “You can always find light in the darkest places. That’s what hope is,” as she clutches the diary with Shabbat candles on one side and a menorah burning brightly on the other. In the next double-page spread, an international array of modern-day visitors standing outside the Anne Frank House briefly, in speech bubbles, wraps up the story of the Holocaust, the diary, the Annex, and the chestnut tree. Anne’s wretched death in a concentration camp is mentioned only in a concluding timeline. I Am Benjamin Franklin publishes simultaneously. (This book was reviewed digitally with 7.5-by-15-inch double-page spreads viewed at actual size.)

A sanitized version of a too-short life.