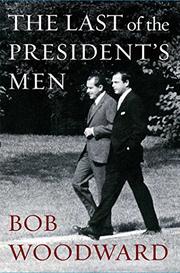 THE LAST OF THE PRESIDENT'S MEN

Four decades after Watergate shook America, journalist Woodward (The Price of Politics, 2012, etc.) returns to the scandal to profile Alexander Butterfield, the Richard Nixon aide who revealed the existence of the Oval Office tapes and effectively toppled the presidency.

Of all the candidates to work in the White House, Butterfield was a bizarre choice. He was an Air Force colonel and wanted to serve in Vietnam. By happenstance, his colleague H.R. Haldeman helped Butterfield land a job in the Nixon administration. For three years, Butterfield worked closely with the president, taking on high-level tasks and even supervising the installation of Nixon’s infamous recording system. The writing here is pure Woodward: a visual, dialogue-heavy, blow-by-blow account of Butterfield’s tenure. The author uses his long interviews with Butterfield to re-create detailed scenes, which reveal the petty power plays of America’s most powerful men. Yet the book is a surprisingly funny read. Butterfield is passive, sensitive, and dutiful, the very opposite of Nixon, who lets loose a constant stream of curses, insults, and nonsensical bluster. Years later, Butterfield seems conflicted about his role in such an eccentric presidency. “I’m not trying to be a Boy Scout and tell you I did it because it was the right thing to do,” Butterfield concedes. It is curious to see Woodward revisit an affair that now feels distantly historical, but the author does his best to make the story feel urgent and suspenseful. When Butterfield admitted to the Senate Select Committee that he knew about the listening devices, he felt its significance. “It seemed to Butterfield there was absolute silence and no one moved,” writes Woodward. “They were still and quiet as if they were witnessing a hinge of history slowly swinging open….It was as if a bare 10,000 volt cable was running through the room, and suddenly everyone touched it at once.”

Less a sequel than an addendum, the book offers a close-up view of the Oval Office in its darkest hour.