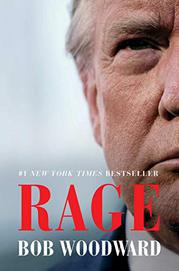 That thing in the air that is deadlier than even your “strenuous flus”? Trump knew—and did nothing about it.

The big news from veteran reporter Woodward’s follow-up to Fear has been widely reported: Trump was fully aware at the beginning of 2020 that a pandemic loomed and chose to downplay it, causing an untold number of deaths and crippling the economy. His excuse that he didn’t want to cause a panic doesn’t fly given that he trades in fear and division. The underlying news, however, is that Trump participated in this book, unlike in the first, convinced by Lindsey Graham that Woodward would give him a fair shake. Seventeen interviews with the sitting president inform this book, as well as extensive digging that yields not so much news as confirmation: Trump has survived his ineptitude because the majority of Congressional Republicans go along with the madness because they “had made a political survival decision” to do so—and surrendered their party to him. The narrative often requires reading between the lines. Graham, though a byword for toadyism, often reins Trump in; Jared Kushner emerges as the real power in the West Wing, “highly competent but often shockingly misguided in his assessments”; Trump admires tyrants, longs for their unbridled power, resents the law and those who enforce it, and is quick to betray even his closest advisers; and, of course, Trump is beholden to Putin. Trump occasionally emerges as modestly self-aware, but throughout the narrative, he is in a rage. Though he participated, he said that he suspected this to be “a lousy book.” It’s not—though readers may wish Woodward had aired some of this information earlier, when more could have been done to stem the pandemic. When promoting Fear, the author was asked for his assessment of Trump. His reply: “Let’s hope to God we don’t have a crisis.” Multiple crises later, Woodward concludes, as many observers have, “Trump is the wrong man for the job.”

An essential account of a chaotic administration that, Woodward makes painfully clear, is incapable of governing.