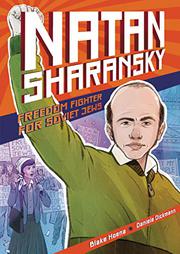 Stories about heroes are almost always a little sad.

Like many activists, Natan Sharansky was punished nearly every time he fought for the goals he believed in. He was accused publicly of espionage by the Soviet authorities and spent years in prison and in labor camps, separated from his wife. The saddest part is that, for many people, his goals would have qualified as ordinary life: He wanted to live in Israel and practice his religion in the open. He eventually won those rights for himself and other Soviet Jews. Even after being locked up for close to a decade and completing several hunger strikes, he still had a remarkable sense of humor. While the dialogue captures emotional tenors well throughout, the most memorable lines in this graphic biography are often jokes he made. When KGB agents followed him into a taxi, he asked if they’d split the cab fare, and after years of constant surveillance, he said, “It’s like I have two shadows: one that is mine, and the other the KGB’s.” The text in the panels’ narrative boxes is less engaging, often coming across as boilerplate, but the pictures help to capture Sharansky’s personality. Though the likenesses—especially the pictures of presidents—aren’t always convincing, some of the drawings are vivid enough to look nearly alive. The historical figures in the illustrations are almost all light-skinned Soviets, Israelis, and Americans.

This biography sometimes feels like a great song, so sad it can leave you joyous.