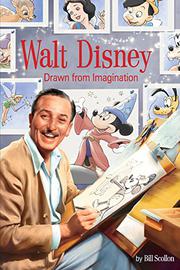 A squeaky-clean biography of the original Mouseketeer.

Scollon begins with the (to say the least) arguable claim that Disney grew up to “define and shape what would come to be known as the American Century.” Following this, he retraces Disney’s life and career, characterizing him as a visionary whose only real setbacks came from excess ambition or at the hands of unscrupulous film distributors. Disney’s brother Roy appears repeatedly to switch between roles as encourager and lead doubter, but except in chapters covering his childhood, the rest of his family only puts in occasional cameos. Unsurprisingly, there is no mention of Disney’s post–World War II redbaiting, and his most controversial film, Song of the South, gets only a single reference (and that with a positive slant). More puzzling is the absence of Mary Poppins from the tally of Disney triumphs. Still, readers will come away with a good general picture of the filmmaking and animation techniques that Disney pioneered, as well as a highlight history of his studio, television work and amusement parks. Discussion questions are appended: “What do you think were Walt Disney’s greatest accomplishments and why?” Brown’s illustrations not seen. An iconic success story that has often been told before but rarely so one-dimensionally or with such firm adherence to the company line. (bibliography) (Biography. 8-10)