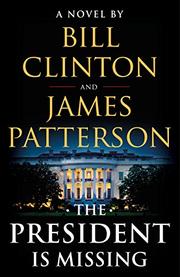 THE PRESIDENT IS MISSING

It’s textbook synergy, as the marketers say: A media-savvy ex-president teams up with the ringmaster of mass-produced pop fiction to churn out a by-the-numbers thriller.

It’s a telling sign of the times that the very first bit of text in this scrappy potboiler by Clinton (Back to Work: Why We Need Smart Government for a Strong Economy, 2011, etc.) and Patterson (NYPD Red, 2012, etc.) is a shoutout to the lawyer who brought them together “and occasionally cracked the whip.” That said, Clinton lifts generous hunks of his own presidential biography in this yarn celebrating the gnarly President Jonathan Lincoln Duncan (think William Jefferson Clinton, natch), who is being assailed on every side. There are Islamic terrorists, but worse, the Congressional committees grilling him from Page 1 on, questioning Benghazi-like episodes in which the Sons of Jihad have been mowing down innocent Americans. Then there’s the “tall, leggy, busty” assassin who’s coming for the Prez without rancor but with clinical certainty. It doesn’t help that Duncan’s veep—“a parasite, living off her host”—may be plotting to take over, nor that the media is given to leaking that he intends “to try to cut a deal with the House Speaker to spare me impeachment if I agree to a single term in office.” And did we mention the killer computer virus that’s about to turn the switch on the information age? What’s a beleaguered politico to do when the klieg lights are on and the bullets are flying? Hunker down and hit the mattresses—but then go all Jack Ryan or maybe even all Dubya (“In the coming days…we will find out who are America’s friends and who are America’s enemies. Nobody will want to be an enemy”), recruit a Lisbeth Salander or two, line up NATO pals and maybe even the Russkis, and go mano a mano with the assembled bad guys, foreign and domestic.

Formulaic but reasonably fun provided you have no expectations concerning probability or literary quality.