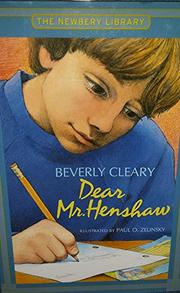 Possibly inspired by the letters Cleary has received as a children's author, this begins with second-grader Leigh Botts' misspelled fan letter to Mr. Henshaw, whose fictitious book itself derives from the old take-off title Forty Ways W. Amuse a Dog. Soon Leigh is in sixth grade and bombarding his still-favorite author with a list of questions to be answered and returned by "next Friday," the day his author report is due. Leigh is disgruntled when Mr. Henshaw's answer comes late, and accompanied by a set of questions for Leigh to answer. He threatens not to, but as "Mom keeps nagging me about your dumb old questions" he finally gets the job done—and through his answers Mr. Henshaw and readers learn that Leigh considers himself "the mediumest boy in school," that his parents have split up, and that he dreams of his truck-driver dad driving him to school "hauling a forty-foot reefer, which would make his outfit add up to eighteen wheels altogether. . . . I guess I wouldn't seem so medium then." Soon Mr. Henshaw recommends keeping a diary (at least partly to get Leigh off his own back) and so the real letters to Mr. Henshaw taper off, with "pretend," unmailed letters (the diary) taking over. . . until Leigh can write "I don't have to pretend to write to Mr. Henshaw anymore. I have learned to say what I think on a piece of paper." Meanwhile Mr. Henshaw offers writing tips, and Leigh, struggling with a story for a school contest, concludes "I think you're right. Maybe I am not ready to write a story." Instead he writes a "true story" about a truck haul with his father in Leigh's real past, and this wins praise from "a real live author" Leigh meets through the school program. Mr. Henshaw has also advised that "a character in a story should solve a problem or change in some way," a standard juvenile-fiction dictum which Cleary herself applies modestly by having Leigh solve his disappearing lunch problem with a burglar-alarmed lunch box—and, more seriously, come to recognize and accept that his father can't be counted on. All of this, in Leigh's simple words, is capably and unobtrusively structured as well as valid and realistic. From the writing tips to the divorced-kid blues, however, it tends to substitute prevailing wisdom for the little jolts of recognition that made the Ramona books so rewarding.