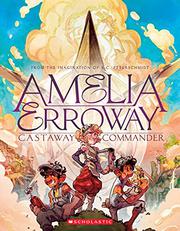 A rambunctious young girl does exactly what you’d expect with her father’s airship.

Twelve-year-old Amelia Erroway is not allowed out of her room while her father’s ornithopter is in flight—but try telling her that. She might look the proper Victorian(ish) lady in her sashed dress, but she daringly climbs on the outside of the airship while it’s aloft. Wide views of the craft provide a treat for any steampunk enthusiast; while the Intrepyd Ray is not at all convincingly airworthy, it cuts an elegant, avian figure in the classical fantasy landscape. Of course Amelia rushes to take it off by herself the moment she gets a chance in a bid to prove to her father that she is too ready to become a commander like him. It’s no surprise that she crashes spectacularly, and in the Juniper, a dangerous rainforest, to boot. Luckily, she meets Rastor and Fynley, a pair of cute and equally rambunctious brothers with a kindly mom, who are only too happy to help her rebuild her ship and call her commander. With a science-minded trio to cheer for and several labeled diagrams to delight the meticulous, the story telegraphs its young nerds’ success, though Amelia’s final choice still comes as a surprise. The watercolor-style illustrations in intense jewel tones convey a sense of wonder. Amelia and her father are White; the brothers and their mom have brown skin and dark hair.